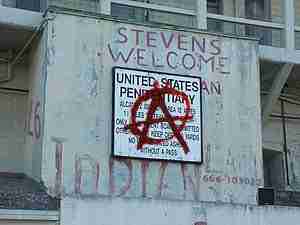 As HOW crews turn from the go-home show and focus on prep for Rumble at the Rock, it seems they have been greeted by a message… or a welcoming, at the infamous island directed towards one man in particular, Scott Stevens.

After weeks of silence, despite attacks on his family, it seems The Hardcore Artist is ready for his final chapter in his feud with Scott Stevens that has spanned nearly a decade.

Known for never shying away from the microphone, it has been eerie silence from Scottywood…  A silence that he has seem to have been plotting something on Alcatraz Island, one that whether it has ever been legal, he has considered his own playground.  So not even GOD knows what he has in store for Scott Stevens once he steps foot into a Hardcore nightmare.  Scottywood may not have had Stevens’ dirty ass name in his mouth… but he certainly has had his imminent demise in his twisted mind.